While technology is evolving by the day and mobile apps are constantly growing, expanding and establishing themselves in the market. Now like any other risk in an enterprise mobile app security could become an incremental issue, especially when dealing with sensitive and private information.

Mobile apps are commonly used by users and they’ve become a huge component of the Business. Making sure that your application is well secured is a must. When developing your app, you should be aware of the pros and cons of the two biggest operating systems – iOS and Android – which one can be considered as the most secure option.

What is Security for Mobile Apps?
Most developers are having strong opinions which one of the two operating systems is more secure than the other one and they all have a solid logic behind their statements. The truth is not as straightforward, though, especially when we are trying to define what exactly security means for a mobile app. Security for an enterprise mobile app can come in different variations – from taking sensitive data from the mobile devices to be shielded from outside invasive attempts.

Android or iOS?
The simplicity of this answer is lacking – all studies done on the topic of enterprise mobile app security are definitive that each operating system has its merits and demerits with security as well.

Developers and fans supporting the thesis that iOS is more secure are arguing that Apple’s operating system has a more thorough filtrating analysis. Before each mobile app is introduced to the App Store, it goes through numerous of tests that determine the potential flaws of the app and when it is ready to hit the market (sometimes might take several weeks), the product is considered as safe as possible.

Android is much faster when it comes down to launching the app, which some consider as not enough testing time which may cause possible security breaches in time. When the iPhone is rebooted, the browser cleans any potential exploits.

Other studies show a different story where Android turns out to be the stronger option. 100% of iOS apps are considered risky because of the sent and received private data is not encrypted, while “only” 92% of Apps created for Android have the same issue. And under 20% of Android’s mobile apps have full access to the contact list of the user, but on the other hand – more than 50% of iOS’s apps have the same access.
Android or iOS Outside Security

When choosing the right platform to build your enterprise mobile app on, security is undeniably amongst the major factors. Mobile app development companies like Singsys are aware of the security trends and are making sure that your mobile app is as secure as possible but there are other factors as well. Speed and cost are among the most important as well but the golden rule of mobile app developing applies here as well – if possible, go with both major platforms – iOS and Android. 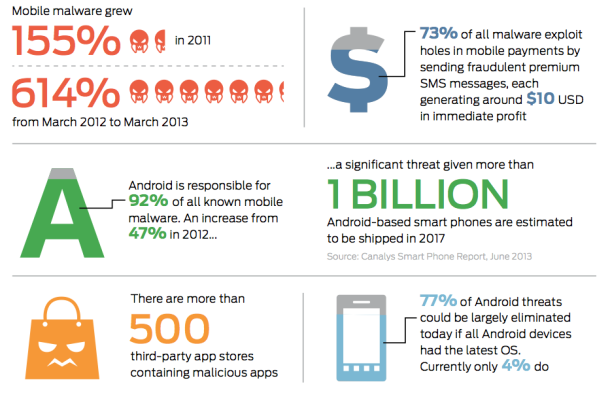 While security is as invaluable as possible, most researchers and experts on the topic are conclusive that users should not be worried. Mobile app development is amongst the most secured and best protected online technology at the moment. Wrongdoers are focusing on penetrating the easy parts of the online world – mobile apps have not been under serious attack from any hackers and the trend is to stay for a while.

Experts advise not to overthink it and to keep it simple with security – VPN, encryption and making sure that users are following the security procedures already built into the phone. These usually include some sort of authentication. Private and sensitive data is always considered as a major threat but mobile app developers are making sure that the users’ information is well-protected.

Mobile App Security testing is the good way to discover underlying security vulnerabilities that have potential to be transformed into a major security loophole once the mobile application gets live. I have personally found malware highly undetectable and a lot of experts to agree with me. Actually, the lack of proper security standards integration into mobile apps as well as its combination with so many access privileges that are granted in privacy agreements make them more susceptible to privacy breach