To optimize the network appropriately it is very important to understand the source of the traffic. When user is responding to user actions then frequent network activity generated by the app is appropriate but not when app is not present in the foreground or simply the device is inside the pocket.

1. Data Compression
Reducing the amount of data sent or received over a network connection is basic step towards network optimization. data can be compressed using a compression technique like  GZIP compression. Protocol Buffers or FlatBuffers are the Binary serialization formats to ensure a smaller on-the-wire packet size and faster encoding and decoding time.

2. Cache Files Locally
Caching is helpful in avoiding the duplicate data download. Reading data from the device is always faster than reading the same data from the network connection. Especially if the data is to be used multiple times then it is recommended to fetch it directly from network instead of storing it on device. In this way future requests will not have to re-download the file. 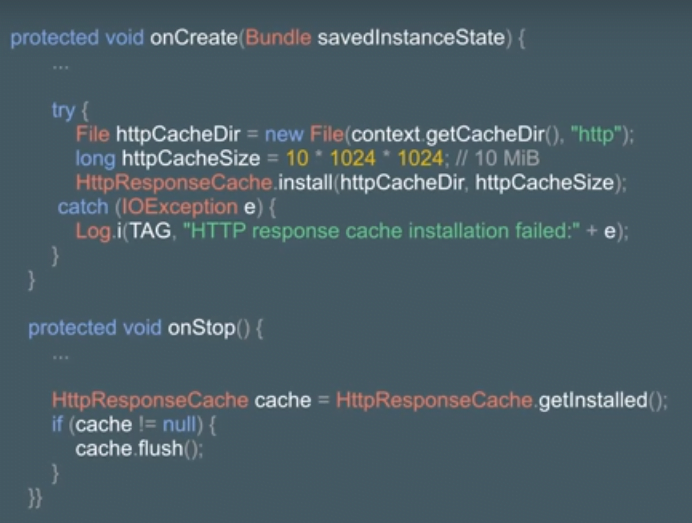 In android application by default caching of HTTP responses is disabled. Turning on the cache means using the HTTP response cache class that allows to decide a location on the device for physical file storage and the max size for cache.  Enabling this will ensure all HTTP responses for the application will be cached on the file system.

It applies to API like a URL connection and HTTP URL connections as well as to other code snippets. It also applies to every HTTP request made from libraries that is bundled inside the applications.

3. Optimization of  User-Initiated Network Use
In case of user actions that need network access it is important to ensure quick handling of user requests for good user experience. In order to provide fast response low latency should be prioritized over power consumption especially when network use is directly dependent over user actions.

Pre-fetch Network Data
To minimize the number of independent data transfer sessions that run on the app it is recommended to pre-fetch the data. Pre-fetch process helps in ensuring which data will be required for the upcoming series of user actions when an action is taken by user on the app and will fetch that data in bulk. 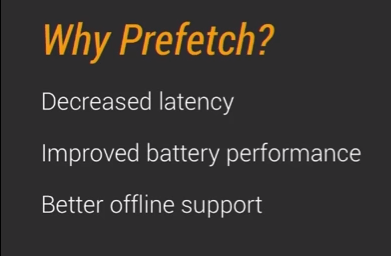 Since the app will pre-fetch the data when mobile radio is awake due to user actions hence no need to wake up the mobile radio additionally. This will limit separate requests to wake mobile radio again and again and improve the battery life.

4. Optimization of App-Initiated Network Use
After the request the cellular radio wait for about a minute extra for server response hence consumes more power and if there are multiple network request it will keep radio alive for very long duration and this will consume even greater battery power.

Network data initiated by app can be optimized by planning which network resources are needed and accordingly these can be scheduled for accessing. Smart scheduling will ensure good number  of rest periods for device radio which will eventually save substantial amount of power.

Implement Effective Network Batching
Batching is an effective way to combine these requests which will wake up and keep radio alive only once. 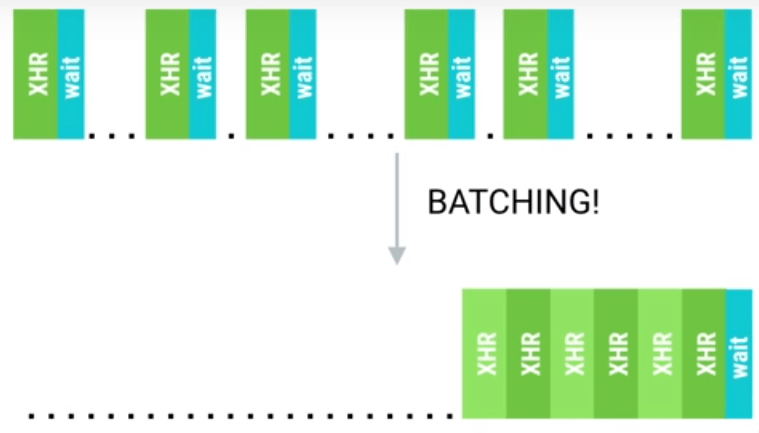 Batching means to intercept the outbound requests and keep them under pending list of actions which will be made in future. There are various complexities in scheduling but, GCM network Manager is a Google Play Services API to schedule network oriented tasks and handle batching as well. In this manner batching will not only optimize network request for better battery performance but will also improve the app performance for users.

5. Optimization of Server-Initiated Network Use
It is quite challenging to optimize the network traffic sent by the servers. Although the app can periodically check for updates by polling the server but it will result in significant loss of network connection and power whenever app starts the radio of device.

An excellent solution to this problem is Google Cloud Messaging (GCM) which enables servers to send notifications to instances of the app on installation thereby ensuring better network efficiency and significantly lessening the power usage.

With GCM the app server will notify the app about availability of new data by implementing the message-passing mechanism. In this manner app will not have to perform any network traffic by contacting backend server for new data. GCM service discards any not required connections where polling might not return any updates at the same time it avoids running periodical network request that will power up the device radio. Interestingly, GCM can be implemented by multiple apps.

Hopefully, the information shared would have provided you a clear idea to optimize the network overhead of android apps. Network optimization provides excellent improvement for user experience as well as safeguard unnecessary battery drainage with smart optimization techniques.

Apart from the responsibility, it’s the professional acumen of an IT firm to ensure not only a customized app on latest cutting edge technology to meet industry standards and make business objectives audible but also to develop android apps that are optimized for minimum network usage for best in class bespoke business solutions offering a great user experience.