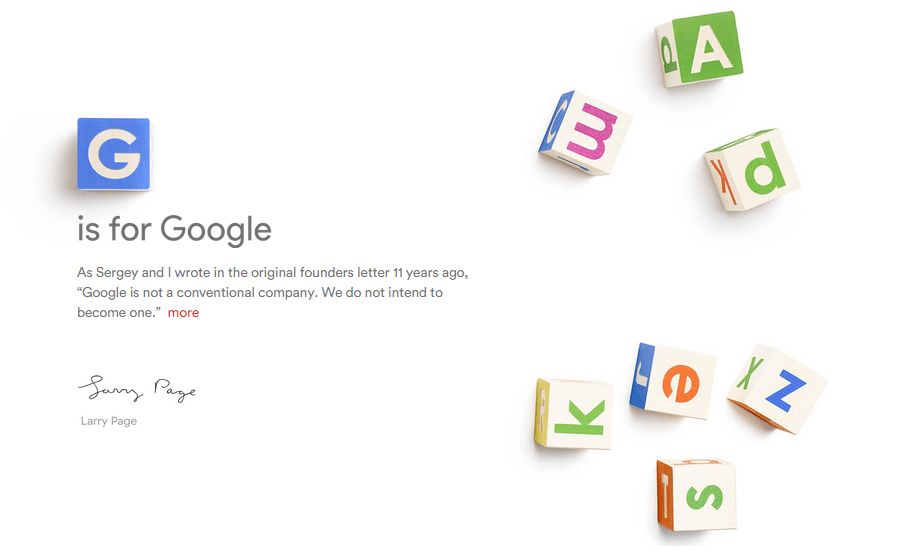 Google has now a new company called Google Alphabet run by Google founders Larry Page and Sergey Brin. Larry Page will work as CEO and Brin as president. Sundar Pichai is now taking over as CEO of Google.

Larry Page simply reported this new parent organization for Google and the greater part of its various offspring. Until further notice, Alphabet’s creation gives off an impression of being a restructuring that will influence Google’s growth going ahead. Page clarified that Google will be thinned down as spinoffs turn into their own organizations. Google/Alphabet CEO Larry Page says in a blog post, “Our company is operating well today, but we think we can make it cleaner and more accountable. So we are creating a new company, called Alphabet (http://abc.xyz). I am really excited to be running Alphabet as CEO with help from my capable partner, Sergey, as President.

What is Alphabet? Alphabet is mostly a collection of companies. The largest of which, of course, is Google. This newer Google is a bit slimmed down, with the companies that are pretty far afield of our main Internet products contained in Alphabet instead. What do we mean by far afield? Good examples are our health efforts: Life Sciences (that works on the glucose-sensing contact lens), and Calico (focused on longevity). Fundamentally, we believe this allows us more management scale, as we can run things independently that aren’t very related. Alphabet is about businesses prospering through strong leaders and independence. In general, our model is to have a strong CEO who runs each business, with Sergey and me in service to them as needed. We will rigorously handle capital allocation and work to make sure each business is executing well. We’ll also make sure we have a great CEO for each business, and we’ll determine their compensation. In addition, with this new structure we plan to implement segment reporting for our Q4 results, where Google financials will be provided separately than those for the rest of Alphabet businesses as a whole.”

Google does not own alphabet.com, BMW does. Alphabet will role as the Parent company for a number of different smaller companies and each company will be run by their independent CEO.