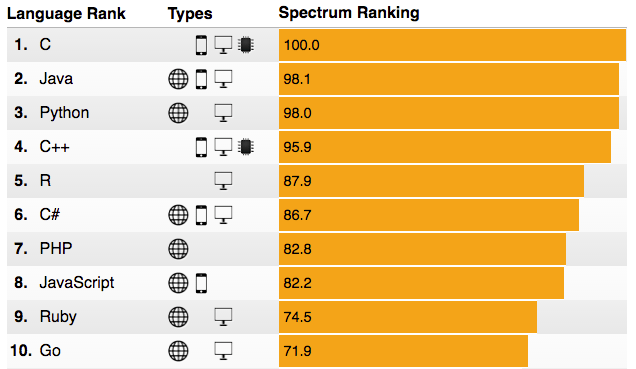 This list is Based on 12 important metrics of most popular programming languages in 2016 to give you a proper insight for best use. Each metric describes various horizon of popularity.

These metrics have been merged to modify a single ranking list ensuring various concerns of our readers. Furthermore, you can filter your interest looking up  for languages used in Enterprise, Embedded Systems, Mobile or Web applications.

After a gap of 2 years C left Java behind for top spot. Python, C++ and R have also reserved  their space in top 5. Interestingly R is new member of top 5 after pushing C# to 6th spot.

Google and Apple with their Go and Swift respectively  are trying pretty hard to be considered among top 10. Swift made remarkable jump of 5 spots to secure 11th spot but, couldn’t out rank Google’s Go from 10th spot.Other striking difference is made from  Ladder Logic reaching 34th spot improving 5 positions to last year. HTML continues its popularity by capturing the 16th spot.

On the low side there is a shocking decline regarding Shell programming popularity. It has fallen to 19th spot losing seven positions. It raises a concern regarding  cloud-based data centers but let’s be calm and hope for next year ranking to get a more concise reflection of statistics.

You will Also Like: Top 10 Impactful IoT Products So Far in 2016