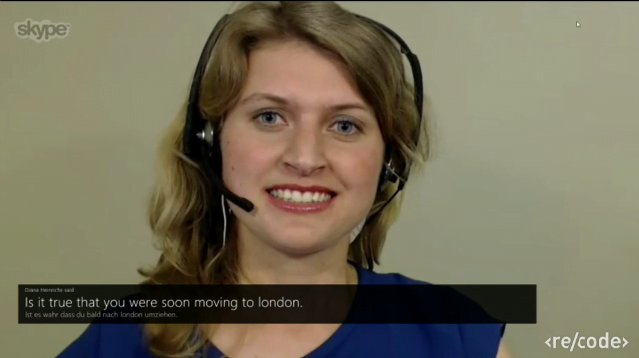 Microsoft’s Skype is testing out the feature of speech translation that will allow the peoples from different countries who do not speak in same language to communicate with each other.

In short, Skype will translate the voice in real time. Microsoft’s CEO Satya Nadella showed off Skype Translator in an on-stage demo at the Code conference today. With it, you can communicate in your native language to another person who speaks different language, and Microsoft will translate it to the other person.
“Imagine in the very near future technology allowing humans to bridge geographic and language boundaries to connect mind to mind and heart to heart in ways never before possible.” Gurdeep Pall, Corporate Vice President of Skype and Lync at Microsoft said in a blog post, “Skype Translator results from decades of work by the industry, years of work by our researchers, and now is being developed jointly by the Skype and Microsoft Translator teams. The demo showed near real-time audio translation from English to German and vice versa, combining Skype voice and IM technologies with Microsoft Translator, and neural network-based speech recognition. Skype Translator is a great example of why Microsoft invests in basic research. We’ve invested in speech recognition, automatic translation and machine learning technologies for more than a decade, and now they’re emerging as important components in this more personal computing era.”
The speech translation feature was the joint collaboration between Skype, Bing, Microsoft’s Research Lab and Microsoft CEO, Satya Nadella said that the feature would be available later this year on as many devices and apps as possible. Skype Translator will arrive first as a beta app for Windows 8 by the end of this year.